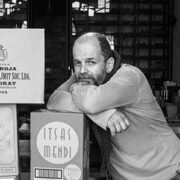 In the twenty years that I’ve been making a living out of selling wine, I have found myself on the island of Santorini six times, all strictly for business purposes, as we say. I can still recall distinctive moments and details from each trip, although I admit that each time I faced the same difficulties, if not a downright inability to remain focused on my goal.

I suppose that even the most ardent travelers of the 16th century would have a hard time turning their backs on such a majestic and enchanting landscape to concentrate on wine tasting and on observing the local soil. I know that my own rather compulsive personality has always meant I took home useful information and vivid imagery about winemaking on the island, which time and again I attempt to distill in an effort to explain just what makes Santorini’s wines so special and unique. Since the very first moment of the very first trip, one thing has remained clear to me, something that, over time, hasn’t changed at all: Santorini is the ultimate terroir.

To put it bluntly, Santorini basically holds the fort, as far as Greek winemaking is concerned. From a practical point of view, the place with the name “Santorini” possesses all of the qualities that result in memorable and exquisite wines. That is to say, it has a historical archive that stretches way back in time, its vineyards and wines have occupied and continue to occupy a dominant posi- tion in both the agricultural and social life of the island, and its soil and climatic characteristics are so intense, even extreme in some cases, that they inevitably lead to a wine with an intense personal- ity, fully reflecting its birthplace.

There are times when, messing around a bit with what the experts call “terroir,” I arbitrarily divide all the vineyards I’ve been blessed enough to visit into two categories. The first category consists of the socalled conventional vineyards, where visitors gaze upon wonderful rural landscapes of neatly aligned grapevines. In places such as Tuscany, for instance, the landscape is such a feast for the eyes and at the same time so cinematic that it looks as if the vineyards, the cypresses, and the olive trees have undergone a manicure-pedicure treatment. The wines produced there are usu- ally representative of their respective viticultural zone, although sometimes their recognizability is enhanced by additional factors that are less wine-oriented.

The second category consists of the Vinis Extremis, as I like to call them, situated in regions that, while being well known, are largely difficult to access, such as Valtellina in northern Italy; the volcanic vineyards of Etna in Sicily; Basilicata, deeply hidden between the regions of Campania and Apulia; Valle d’Aosta in the Italian-French borders; Liguria with its steep slopes; Banyuls-sur-Mer in the southernmost part of France; or the Jerez triangle in Andalusia. These vineyards, despite being just as beautiful as their more typical counterparts in the first category, are also the site of the battle of the grapevine and the winemaker against extreme climate and soil conditions. Indisputably, Santorini belongs to the second category, as it, too, is considered a rugged frontier outpost of the wine world.

The Therian soil (“Thera” being another name for Santorini) specializes in the production of white – mainly dry – wines, based on Assyrtiko, the most important Greek white grape variety, and, to a lesser extent, the varieties Aidani and Athiri. But there are other types of wine to be found on the island as well, such as the sweet sundried Vinsanto wines and the dry red ones based on Mavrotragano and Mandilari, albeit in much smaller percentages. The white wines, which are the spearhead of local wineries, are characterised by intense (“dental”) acidity, rich body and ageing potential. Today, there are about 20 modern wineries in an area of approximately 2,700 acres of own-rooted vineyards. The plants are cultivated according to the traditional method of ambeliá, meaning that they are formed in the shape of a basket, so as to protect the grapes from the seasonal meltémi winds and the sand. In fact, it seems to me that ambeliá are one of the few remaining bridges connecting the wine producers to their past. The truth is that, nowadays, the vintages aren’t as festive as they used to be. Traditional cánaves (storage rooms where wooden barrels were once kept) aren’t part of modern wineries and their stainless steel tanks. It can even be said that the wines’ basic characteristics are somehow different from that of last century’s wines.

The bottom line is that the wines of Santorini have experienced both prosperity and decline throughout the years but, having survived difficult historical times, today they’re largely well- known, contemporary in nature, and popular. Perhaps this vindicates the abbot of the Lazarist Monastery of Thera, Abbé Pèques (1824-1837), who once wrote: “These wines will not be appreciated, and they will not be sold at their true value, until the people of Santorini learn how to render them fashionable in foreign markets. Because they possess all of the characteristics that can make them welcome everywhere.”

With regard to the region’s climatic peculiarities, principally the lack of water, it’s worth mentioning that the morning dew that covers the island during the summer months offers the grapevines much-needed moisture. At the same time, the áspa – as the locals call the volcanic soil of Santorini – provides the wines with their famous minerality. Reminiscing about the past is invariably charming and evokes rather noble, warm and nostalgic feelings in us all. Similarly, the vineyards of Santorini have countless true stories to narrate, thanks to the accounts of Mediterranean travelers and to the efforts of the Fani Boutari Foundation and of Stavroula Kourakou-Dragonas to preserve the island’s wine history. This doesn’t mean, however, that we should remain dogmatically attached to the habits and traditions of a bygone era. What is certain, in my view, is that the place named Santorini is on the right track. The island’s winemakers have managed to produce competitive wines with a distinct identity and a unique role in foreign markets.

Their personalities form a diverse mosaic, where each and every one of them is essential: traditional, modern, innovative, classic, natural, conventional, indigenous or not, they all make their way under the toponymic umbrella of the island, which, truth be told, doesn’t leave much room for experimentation or oenological anarchy. To satisfy everyone’s thirst for namedropping, I could refer to a few of them more directly. At the Boutari Santorini winery, there’s the Boutari family, who settled on the island in the 80s and played the role of the Noble Family that all place names need in order to establish themselves in the minds of consumers. The winery of Paris Sigalas (located in Baxedes, Oia), which will soon complete 30 vintages on the island, carries out perhaps the most reliable and consistent work among the vineyards of Santorini, with something to satisfy every taste.

Much further south, in the purely viticultural part of the island, stands Estate Argyros, with its accumulated know-how that takes us all the way back to 1903. Their wine style is a straightforward one; their Vinsanto, on the other hand, is so hedonistic that many wine journalists have a hard time accurately describing it. To the east, between Kamari and Monolithos, we find Gaia Estate, where Yannis Paraskevopoulos and Leon Karatsalos have made their mark and added a more innovative approach to the most crystal clear wine profile on the island.

Up north, in Pyrgos, we come across the winery of Haridimos Hatzidakis, who had one of the most effective and, at the same time, idiosyncratic approaches to wine in the whole of Greece. The late founder of this winery left as his legacy a unique, rich and highly expressive wine style, alongside truly beautiful wine memories. Gavalas and Canava Roussos are both family businesses with deep historical roots and a clearly traditional orientation, something that doesn’t keep them from attracting enthusiastic supporters/ consumers. The winery of Artemis Karamolegos was established in 2004; it, too has family roots in local viticulture and produces very honest, very consistent wines.

There is, of course, also the dynamo of the island, the “Cooperative” or “Santo Wines,” as we call it. In operation since 1947, it currently has 1,200 members and is considered the custodian of Santorini’s historical wine heritage. Ktima Tselepos, Ktima Gerovassiliou and Avantis Estate – despite being old acquaintances from other wine-producing zones – all constitute relatively recent arrivals on the island; yet, very much like Vassaltis Vineyards, they had no problem finding their footing and gaining the trust of consumers. To sum up, I’d like to point out that, contrary to the lust for commercial titles found in the rest of the country, Santorini has gained its recognition and its current prosperity by building upon its toponymic identity, and on the homogeneity of its wines. Inevitably, any personal preferences I may have come second to appreciating this united front. g