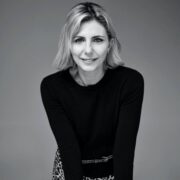 If you had to personify Crete, it would be in the form of Iliana Malichin. Strong, beautiful, proud and hospitable, she has, despite her youth, already built up strong roots, and dreams of ways to help her homeland. The vineyards of Melambes are some of the most impressive ones we’ve ever seen.

We’re at a vineyard, at an elevation of 900m. The sea is peeking through the mountain ridges, and the views are breathtaking. We’ve piled into the back of a pick-up truck that Iliana has borrowed specially for our visit, and we’re admiring the prephylloxera vineyards all around us, some as old as 140 years.

Vineyards this old retain all the old varieties, too. Though Vidiano prevails, there are also Plyto, Melissaki, Thrapsathiri, Rokeiko and Liatiko. “I believe that these old vines have found their own way to keep balance in growing and nurturing their grapes, and that’s why I don’t intervene in their growth,” Iliana tells us, confirming what we see all around us. “The vines huddle close to one another and they seem to like that proximity. It’s good for them to be in contact, they seem to make a better time of it, and it’s preferable to me coming and hacking away at them.”

Raised in Athens, Iliana was looking for a way to relocate to Crete from an early age. She spent winters watching home videos recorded over the summers spent in her ancestral Cretan village, helping out her grandfather in his olive groves and in his small vineyard. He believed them to be, she says, akin to Burgundy vines. The plan went as follows: university studies in Agriculture, then an MA in Oenology, and then a PhD in Vidiano. Her thesis concerned the isolation and identification of yeasts native to the Vidiano variety, and it caused quite a stir, but the funding to implement its findings is still not at hand. After working for the Alexakis and Douloufakis Estates on Crete, Iliana’s next stop was Santorini, where she met her current associate Spyros Chrysos. She proposed a business partnership. Having joined forces, they set out to search for a Cretan vineyard, and to ultimately become pioneers in the field.

“I came to this place with no vineyards of my own. So, I started by buying grapes from the local producers. I now have my own team of 30 producers who do nothing without first consulting me or unless I tell them to do it. The responsibility is all mine, and I am constantly in the vineyards guiding them. We hold frequent seminars with guest agriculturalists. I buy my grapes at exclusive and pre-arranged prices, which are among the most expensive in Crete. I do this because, when I first arrived on the island, the producers were disappointed with the old vines. They kept hearing that they’d see higher yields with grafted vines. And while they worked really hard and toiled to care for five acres of vines, they only saw a return worth a single acre. They wanted to get rid of the old vines, so the only guarantee I could give them was a fixed, high price. My aim for Melambes, as well as for here in Fourfouras, was to save the old vines, because they are our heritage. The changes that we’ve made in their cultivation, and in the care we show them, have made the old vines increase their yield by 60%. We’ve also planted 60 new acres, with local help. My first year here, everyone was a bit wary of me. But when they saw that I was on their side and that I keep my word, things changed. Well, they also saw a bit of my crazy side, but they saw my honesty. They’re truly happy that today their village is well known elsewhere, even as far away as Australia, where many have family.”

This 27-year-old Iliana is undeniably impressive. The winery – gorgeous, by the way – is housed in an old storage space belonging to the Melambes cooperation. Additionally, the Malichin-Chrysos winery, with the help of subsidies, managed to purchase tanks and machinery. They produce three labels at about 7,000 bottled annually. The “Rizes 2” is a blend of Vidiano from Fourfoura in Rethymno and Assyrtiko from the Loyron vines in Santorini. The “Vidiano Young Wines” is from 10-15 year-old vineyards, and the exquisite “Vidiano Old Wines” comes from vineyards that are more than a century old.

From Iliana’s tanks, we tasted an 8-month-old Vidiano that is waiting to be blended with Assyrtiko, as well as a 6-month-old Vidiano just before it was to be bottled. During vinification, very few sulfurs are used, the yeasts are only the ones that exist in the must, and the stabilization process is also done in a natural way, without human intervention. Whole bunches are used, and wines stay on the lees for a while at the beginning of the process. The wine’s acidity is excellent, as is its minerality and, as Malichin tells us, some may even be able to detect a slight saltiness from the island’s sea spray.

Accompanied by Cretan melodies that Iliana finds suit her wines the best, she confides in us, “I believe in the biodynamic processes, and the way the taste of my wines changes with the waxing and waning of the Moon. I also notice that, on certain days, their mood changes, affected by my own. There was a very hard day for me, a day when I was stressed and emotionally drained, that I went to the winery and opened a tank, and the smell was so good and so different, that it really comforted me. I’ll never forget that smell – it left such an impression on me. I doubt that it has ever smelled that good to me before, or since.” g