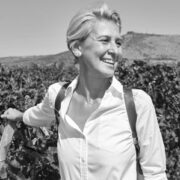 Peter Sichel is a true legend in the wine world. Born in Mainz, Germany, in 1922 into a wine business that his family had established in 1875, Sichel found the path he was meant to walk interrupted by world events. Growing up Jewish in Nazi Germany, Sichel was sent by his family to school in England before the family resettled in France. After being interned as an enemy alien at the outbreak of World War II, Sichel escaped France and made his way to the US. As for the world of wine, he didn’t get into the business until he was 37 years old, after a career in the OSS (US Office of Strategic Services) and then the CIA, for which he served as the first station chief in Berlin after the war. Once he left the CIA, he decided to finally follow the career he had been originally destined to undertake, entering the family wine business. His name became associated with one of the most successful brands in the history of wine. Blue Nun was his creation, a wine born out of his conviction that a single, simple, off-dry wine that went with practically everything – eliminating the sometimes difficult question of food and wine pairing – was the way to conquer the American market. By the beginning of the 1980s, Blue Nun had sold 45 million bottles, becoming the first wine produced and marketed specifically to target a mass market.

Peter Sichel has a truly fascinating story which has been chronicled in his memoir The Secrets of My Life: Vintner, Prisoner, Soldier, Spy. Grape had the opportunity to meet him in New York, where he lives with his Greek-born wife Stella. He shared with us his thoughts on Greek wine and what Greek winemakers might do to raise their profile in a changing world.

To what, as a brand, does Blue Nun owe its huge success?

First of all, let me give you a bit of the history. To begin with, the creation of the Blue Nun label was actually an accident. When my father and his cousins came back from WWI and returned to the business the family had been running since 1857, they decided they didn’t like the labels. Having been around the world, and having seen different things, they thought the labels they used were too old-fashioned, so they asked the printer to design some new ones. He designed a blue label with brown nuns on it, a reference to the Church’s contribution in preserving the vineyards in Europe. When they started shipping the wine under the new label, their customers wrote back: “Send us more cases of the Blue Nun.” So it was the customers who gave the product its name. When I took over the business in the 1960s, we were selling 10,000 cases of Blue Nun in the United States. But this “Blue Nun” was, in fact, different wines from different areas at different prices. I eliminated all except one. You see, if people ask for a brand, they want the same product; they’re looking for the same taste each time. This is what we did and, at the time, people didn’t drink much wine, so they weren’t that knowledgeable about wine. What they were looking for was a wine that was consistent and would go with everything. This is what we gave them, and that’s why Blue Nun was such a huge success. We became a big hit in the 1980s, selling 45 million bottles.

So the creation of one strong brand is the way to conquer a new market in the wine business?

There is an evolution that takes place when people start drinking wine. You don’t start out with knowledge and you don’t start out being able to distinguish between wines; you start out by drinking. Only after you develop a market for people who aren’t drinking just to drink but are drinking to have an experience can you take the next step. I knew Blue Nun’s huge success wasn’t going to last forever. As wine became more popular and people became more selective, I decided I wanted to offer varietal wines with my name on it. But my partners back then didn’t want that.

What’s your opinion of Greek wine?

I’ve spent many summers on the island of Paros, where we had a summer house. While there, I used to drink only Greek wine. Greek wines are really good, but the problem is that they’re produced in small quantities. I’ve tried different types and some were really good indeed. Santorini wines have become very popular in the United States because their producers did the right thing. For years, I helped the people who were promoting Greek wine in America, telling them that they have to specialize in very few things that nobody else can make. I mean, this preoccupation – not unlike other people in the world – of growing Merlot and Cabernet… Nobody is interested in that. You have varieties that exist only in Greece that produce really interesting wines.

What is your advice for Greek winemakers?

What you need is to have one wine that has an original taste, a name that’s easy to pronounce and some good packaging. The one wine that everybody knows, the Assyrtiko wine of Santorini is doing exactly that. Red wines are a bit more complicated, because there’s more competition.

Do you think Greek wines are expensive?

I don’t have favourite wines. I think it’s silly to have a favourite wine. I have favourite regions, and Bordeaux is definitely one of them. But I can’t say I don’t like Burgundy; I used to go there once a year to buy wine. I was a wine merchant, you know. Well, in fact, I still am!

While we were talking, Mr Sichel, a lover of detail, as his wife told us with a smile, insisted on searching online to find out the exact price that Santorini wines are currently commanding in the United States. At the age of 97, he is fully aware of all the new wine apps in use around the world. “The Wine Searcher is a very useful app; I use it all the time when I’m looking for one particular wine. The wine world might have expanded tremendously in the last few years, but it’s still a friendly community of people willing to talk to each other and to give each other advice, especially when that means ensuring that all of them are making money!” g